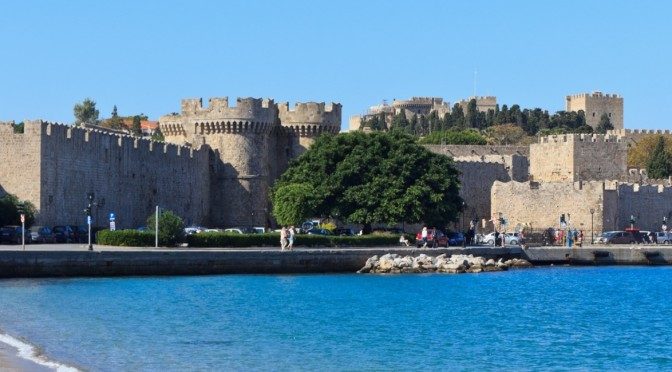 Welcome to Rhodes, the capital of the Dodecanese, an island which is ideal not only for those who want to relax but also for those looking for an action-packed holiday! With its bright green hills, rich green valleys and uninterrupted line of golden beaches, Rhodes is truly a blessed place.

The Greek Island of Rhodes is considered to be the sunniest place in the whole of Greece. This is what you would expect, given that it is governed by the god “Helios” – the god of the sun. We can help you to find your ideal Greek home in Rhodes, as we have many homes and other real estate for sale.

Rhodes has the most colourful history of all the Greek Islands. The old town is the oldest inhabited medieval town in Europe, a legacy of the Knights of Saint John. The Colossus of Rhodes, one of the seven wonders of the ancient world, was reputed to have stood astride the harbour entrance.

Nowadays, Rhodes (Rodos) is a popular and cosmopolitan tourist island. There are many sandy beaches, especially down the east coast, and while there are some busy resorts, there are also quiet traditional Greek villages. The west coast is considered to be wild and very windy the majority of the time.

Rhodes Island, this Perl of Mediterranean Sea, is a magic combination of natural beauty and ancient culture. UNESCO awarded the island capital (which is also called Rhodes) the title of a World Cultural Heritage Site.

But Rhodes is more than that. It is one of the most developed islands in the Mediterranean and it provides its visitors with every holiday amenity including large and modern hotels of international standards, yachting harbour, entertaining night life, casino and sports facilities.

Throughout the year, a number of artistic events take place on the island, including the “Sound and Lights” performances at the Palace of the Grand Masters, Greek tragedies and folk dances at the Medieval Theatre.

Having always been a magnet for visitors, Rhodes is considered all over the world as the real holiday paradise, an island which mixes the historical interest with the cosmopolitan way of life as well as the natural beauty and the perfect climate. With 300 sunny days per year the island holds the Greek sunshine record. Its remarkably rich legacy in archaeological treasures and developed tourism infrastructure make Rhodes more attractive than any other vacation or meeting place of the world.

Rhodes, after all, boasts all the ingredients to be an unrivalled incentive and meeting destination. It is the ancient, traditional, cultural and scenic characteristics which place it virtually in the top position.

Nothing will prepare you for the diversity that Rhodes Town has to offer, great shopping, cafes and bars galore a pretty parkland as well as the bustling harbour of Mandraki.

In complete contrast, you find impressive 15th century buildings within the majestic walls of the Old Town with narrow cobbled streets, traditional coffee shops and tavernas all nestling within the shadow of the Palace of the Grand Masters once home to the Knights of St John.

Travelling down the east coast, we come to Tsambika, which has fantastic sea and mountain views, as well as one of the best beaches on the island. Further south is Kalathos, which has a lovely beach as well as a selection of tavernas and bars.

A couple of minutes south of Kalathos is Lindos, which is the jewel of Rhodes. Greek property in Lindos village itself is very expensive and normally handed down through the family, so many people choose a property in Rhodes just north or south of Lindos village.

Just south of Lindos is Pefkos, which has a large sandy beach as well as tavernas, bars, other shops and some supermarkets. Pefkos is a popular resort in its own right.

Moving further south, we come to the village of Asklipio, which is slightly set back from the coast and has stunning views. Kiotari is a little further on, and is a very stylish area with some luxury hotels, excellent tavernas and a shopping centre.

Further on, we reach the village of Genadi (Gennadi) which is very unspoilt and has a large selection of tavernas on the beach. This area has a massive expanse of beach and Genadi is a traditional, living, Greek village with full amenities all year round. Of course, Lindos, and many other parts of Rhodes, are only twenty minutes drive away should you need them. Due to its location, this area is proving to be very popular for Rhodes property, and we have a number of Greek properties for sale right on the beach.

Finally, we reach Lachania which has an excellent beach, and is still relatively untouched by tourism.

Apart from the hundreds of charter flights, EasyJet now has a regular service from the UK to Rhodes. This is expected to increase and to become a year round service which is bound to hit property prices in the next couple of years.

Rhodes Island is a perfect place to purchase your real estate. The island population amounts to 120,000 people only, and its coastline is approximately 220 km long. It creates unique opportunities for various types of recreation and rest.

The best value property in Rhodes is new/re-sale properties, and our website is updated on a daily basis with the latest discounts and property bargains.