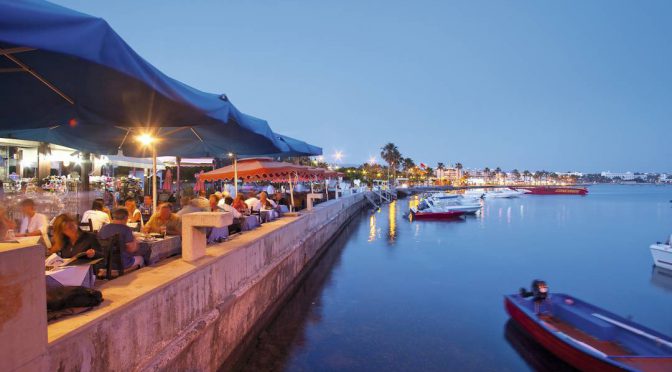 Paphos is a coastal city in the South West of Cyprus about 50 km (31.07 miles) west of Limassol. It is blessed with sunshine all year round and surrounded by its famous sun-kissed, white sand beaches, mountain terrain and some of the best golf courses in Cyprus.
Paphos is a World Heritage Site and has been inhabited since the Neolithic period and was a centre of the cult of Aphrodite, the Greek Goddess of love and beauty, and of pre-Hellenic fertility deities. It has been selected as a European Capital of Culture for 2017. In Greco-Roman times Paphos was the capital of Cyprus and it is well known for the remains of the Roman Governor’s Palace, where extensive, fine mosaics are a major tourist attraction.

Paphos is home to a number of top class golf courses, including Aphrodite Hills, with facilities at par with the beautiful, natural surroundings of Paphos, providing all the necessary amenities for golf lovers.

Paphos’s history attracts divers to explore the crystal clear waters, underwater ruins and wrecks and the abundant marine life fed by the Eastern Mediterranean sea. The water temperature is perfect for scuba diving and snorkeling and ranges between 16 to 27 degree Celsius.
it is a short distance to Coral Bay and St. George’s Island where there are various diving spots, sea caves and grottos.
Paphos enjoys a subtropical-Mediterranean climate, with the mildest temperatures on the island.

Whatever type of property you are looking for, we can find a home to fit your lifestyle and budget. Call us now and take the first step towards finding your holiday home in Paphos and Aphrodite Hills.