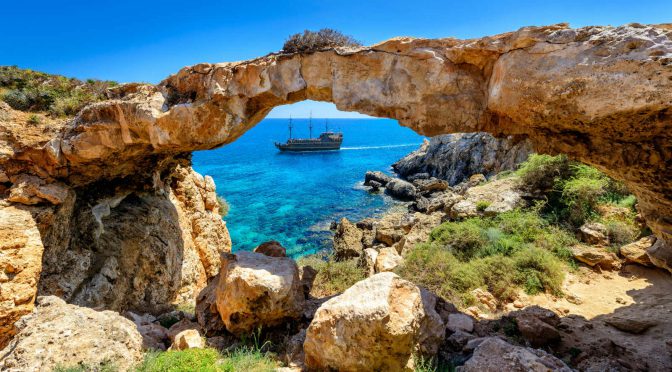 Cyprus is known as ‘the playground of the gods’, and for good reason too!Aphrodite is said to have risen out of the sea waters near Paphos.

In geological term Cyprus is an ophiolite. It rose out of the sea around 20 million years ago.

Cyprus is one of only a few places in the world where Green Turtles & Loggerhead Turtles nest.

There is a map of Cyprus on its flag, the only nation to do so until Kosovo did the same in 2008.

Cyprus is a divided island.

The southern part of the island (60%) is the Independent Republic of Cyprus and is part of the European Union and recognized by the United Nations.

The North part of the island,(40%) called the “Turkish Republic of Northern Cyprus”, is ruled by the Turks Cypriots..Is not part of the EU or the UN.

As the story goes, Cyprus was the birthplace of the Greek goddess of love, Aphrodite. But its long history of love also includes the fact that it was a gift from Antony to Cleopatra; she apparently used native plants to make her own exotic perfume. Another myth has it that Richard the Lionheart skipped a year of the Crusades to live there when he fell in love with a local woman.

Cyprus main language is Greek, however almost everyone speaks English.

Cyprus was once the wealthiest nation in the known world. It was during the Copper and Bronze Ages, when the island’s rich natural copper resources were exported to other countries.

Cyprus is one of Europe’s most southerly ski resorts.

371 species of bird can be seen on the island of Cyprus. Most are migratory birds and are seen during spring and autumn.

Cyprus is home to 20 rare species of orchid.

There are more than 1950 species of flowering plant in Cyprus, 140 of which are found nowhere else in the world.

260 species of fish circle the warm Mediterranean waters around Cyprus.

More than 45 beaches on Cyprus have been awarded the EU Blue Flag for cleanliness & safety.

The major industries that contribute to the Cypriot economy are tourism, fruit & vegetables, wine, cement, clothing and shoes.

The standard rate of VAT in Cyprus is 19% but varies per product or service.

Kolokasiis a speciality root vegetable grown on Cyprus. It is a type of sweet potato.

Commandaria is a sweet red wine produced in Cyprus. It is reputed to be the oldest wine in the world.

Ayia Napa in Eastern Cyprus is one of the most popular night club districts in Europe.

The largest freshwater fish caught in Cyprus was a 31lb 4oz Mirror Carp. It was caught in the Dhypotamos reservoir between Larnaka and Limassol.

The Cyprus International Opera Festival is held every July. It takes place in a number of venues across the island.

The only horse racetrack in Cyprus can be found in Nicosia. Approximately 60 race meets are held here throughout the year.

For international calls, the telephone dialing code for Cyprus is (+) 357.

Cyprus has two international airports- one at Larnaca and the other at Paphos.

Crime rate is very low in Cyprus, making it one of the safest places in the world to live.

In Cyprus it sunshine’s 365 day per year.

In some months you can sky in the mountains in the morning and then you can swim in the sea in the afternoon.